The process of creating the Quethiock Neighbourhood Development Plan (NDP) has been led by members of the community and is part of the Government’s recently revised approach to planning contained in the Localism Act of 2011 i.e. local people have more say about what happens in the area in which they live.

The aim of this NDP is to put forward the wishes of the community as to any future development. The Parish Council’s vision for 2031 is that we will have established new housing to meet the local community’s needs, the school will have benefitted from increased numbers and that the Pavilion will have become the hub of the Parish.

This NDP contains a number of policies, which includes some areas where the Parish Council will encourage some small developments and changes, and other areas such as “Green Spaces’ that the community wish to protect.

These policies have been drafted following interaction and consultation with the residents of Quethiock Parish “the Parish”. Details of the consultation process are contained in the Consultation Statement, published separately. 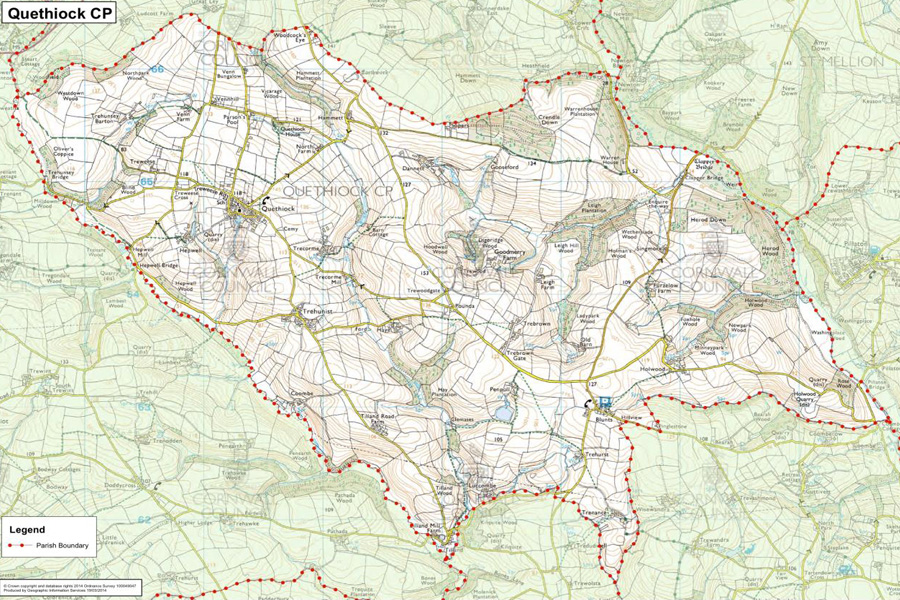 Accordingly, in 2012, a revised Parish Plan was produced; however, it was soon realised that the Parish Plan does not carry the same legal weight as an NDP and that an NDP, produced by the community and voted for in a referendum, was required. Notwithstanding, the Parish Plan is still relevant and covers a wider remit of issues than the NDP.

The Parish Council’s aim, in light of the changes in planning laws, is to put forward the wishes of the community as to what future development in the Parish should be. This plan would then form part of Cornwall Council’s Development Plan and become a “Planning Consideration” which gives our Parish its proper say regarding any future development. Our intention is to direct and shape the density and mix of private and affordable housing and other developments within the Parish. We wish to encourage appropriate growth and sustainable development whilst ensuring farmland, the rural nature of the Parish and its natural beauty are protected.